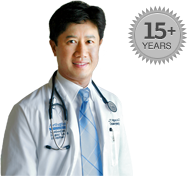 Dr. CT Nguyen has 15+ years experience as a leading ENT expert and has helped hundreds of people get relief from their nasal & sinus conditions.

DR. NGUYEN HAS BEEN FEATURED ON

Is A Deviated Septum Impacting Your Health?

If you answered ‘yes’ to any of these questions schedule an appointment with Dr. Nguyen.

"Dr. Nguyen and his staff are very nice. The sinus procedure was tough at the beginning as I could not take steroids to aid the recovery process, but now I'm feeling great!"

What Is a Deviated Septum?

Inside of your nose, you have a thin wall of cartilage and bone called the nasal septum. The nasal septum is what divides up your nasal cavity. Ideally, it should divide the cavity equally so that both nose airway passages are symmetrical and easily carry air through the nostrils, down your windpipe and then into your lungs.

However, around 70-80% of people have their nasal septum off-center. When the imbalance is minor, symptoms are either nonexistence or very mild and manageable.

When the septum is significantly or severely off-center, then it becomes what’s known as a deviated septum. The wall is displaced and one nasal passage is smaller than the other. When this happens, you may start to experience more noticeable signs and symptoms, possibly to a point at which your daily living and quality of life are impacted.

This displacement can affect either nostril. Due to the nature of the nasal cycle, a deviated septum can make it hard to breathe through the nostril on the affected side as well as the one on the opposite side, potentially causing significant breathing difficulty.

What Are the Signs and Symptoms of a Deviated Septum?

Because one of the nostrils is smaller than the other, the most common sign of a deviated septum is trouble breathing. The nasal septum is a flap of cartilage dividing the nose in half. Normally, air enters through the nostrils, goes up the nose and eventually down the trachea (windpipe) and into the lungs. When the septum is deviated, air flow is disrupted. It can no longer take a straight path and is more likely to encounter mechanical obstruction along the way. This causes those suffering from a deviated septum to exert more force in order to draw air in. Breathing is normally done involuntarily because the lungs require a constant influx of fresh oxygen. You might feel like you are breathing more from one side of your nose than the other, or that you are having to make a conscious effort to keep breathing. Nasal congestion is another clear sign. Other signs and symptoms might include:

While the only sure way to know if you have a deviated septum is to visit a doctor, the presence of these issues is a pretty good indicator that you might have the condition.

Many times, a deviated septum is caused by sinus development issues. These can generally be seen at birth. Other times, they can be caused by injury to the nose. Whether it’s through a broken nose or head trauma from an accident, the impact can leave the septum misaligned.

If symptoms are severe, then your doctor may recommend septoplasty, which is a surgical correction to reposition the septum and create two open nasal passages. If you have any questions regarding your deviated septum and treatment options, Dr. Nguyen, an ENT specialist and expert serving the Houston area, can provide you with an assessment to help you determine if surgery is right for you.

For any additional questions about septoplasty or other ways to manage deviated septum symptoms, contact Houston Sinus & Allergy today.

We are pleased to offer in-office visits and virtual/telehealth visits for patients concerned with COVID. Schedule In-Office Appointment | Schedule A Virtual Appointment
+